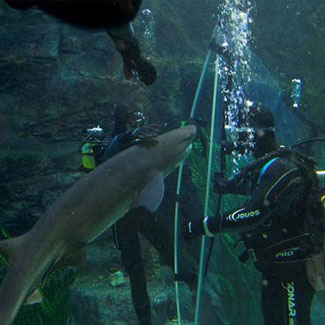 In a concerted effort to substantially reduce the stress levels during the process of catching sharks, Aquarium Vet Rob Jones has designed 'The Aquarium Vet Shark Bag'.

This device comprises of a see-through material which is barely visible to the shark.

When it is caught inside it hardly realizes and thus does not experience any major stress levels.

The divers then swim the device to the surface where one can treat the shark.

In case a shark needs to be relocated from the pool, we have implemented a zipper which is positioned 1/4 (one quarter) from the front.

This revolutionary device has been in use since 2009, and Rob himself has caught a variety of species such as Sand Tiger Sharks, Sandbars, Seven Gills and many more.

The TAV shark bag Mark II is made of the highest quality materials ensuring the optimum combination of strength and flexibility.

Additional to the device shown in the video we have incorporated 2 bendable rods.

These enable the divers to open and close the front of the Shark Bag.

3 handles are placed on both sides of the device to ensure the best possible control during the capture.

A zipper is fitted at the top for easy access to the animal.

A zipper to open the front of the bag enables the shark to slide forward out of the device into a shark carrier - ready for further transportation (relocation).

A (noodle design) floating device slides into a sleeve at the top of the bag to ensure it stays upright when submerged.

Mesh fabric at the front ensures that oxygen can be provided to the shark during the duration of its capture. 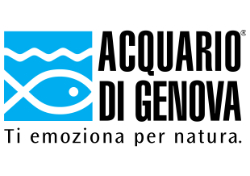 Hi Maureen, I would like to let you know...

We, in the past, have bougth a few stretchers and a couple of ray trays from you, and they are excellent.

I have also used the The Aquarium Vet Shark Bag successfully, and it’s exactly what we need for moving our sharks!

Thank you for your support. 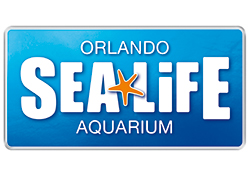 “SEA LIFE Orlando purchased 2 different sized TAV Shark Bag’s. The build quality and ease of use made this piece of equipment an excellent choice for capturing, restraining, and transporting sharks both safely and effectively. These bags are not only as a great way to protect a shark from harming itself during capture procedures, but more importantly to provide excellent protection for staff members as they transport the animal.”